The only thing I love more than a dinner party is a reason to throw one, which is exactly what came with today's prompt.

On Sunday evening, some of my favorite people came over to The Hilton (my house) and we indulged in a 50's inspired meal with oysters rock-a-fella and gimlets cast in the co-starring role. We kept the meal pretty light with a small green salad and roasted veggies on the side because the one thing I learned from watching Mad Men is that you don't want anything to outshine your beverage of choice.

The gimlets were a smashing (ha!) success and I couldn't have been more proud of my oysters. Disclaimer: I've never had oysters, let alone Rockefeller style but it was delicious nonetheless and received lots of praise.

We finished the meal with dessert, of course. I suck at baking, but BandMan is an excellent baker; he made some super moist (do you hate that word like most peeps?) pineapple cupcakes.  In the 50s canned pineapple was all the rage because good ole Dole had just figured out how to tin that shit and ship it to the continental U.S. from Hawaii.

Being a house full of musicians, we rounded out the evening with some epically weird jams (accompanied by another round of gimlets) and great conversation. 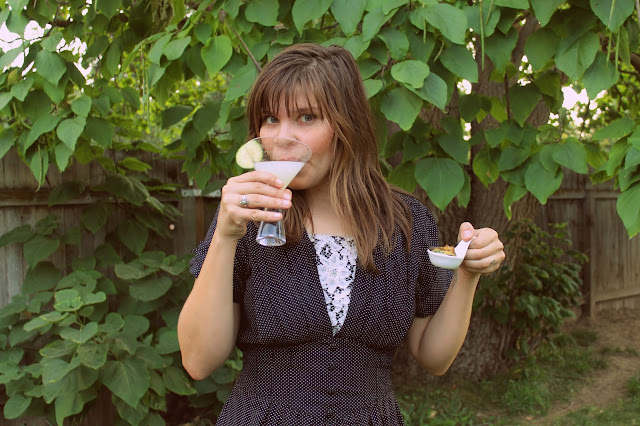 Tomorrow: Something Blue, see y'all there.
ICYMI: Here's Day 8: Reach out! Make a new vegan friend and tell us about it.