So my new neighbor (who is awesome and from this point forward shall be referred to as PaleoChick) wasn't feeling very well the other day. She's been having some sinus and flu like symptoms since she moved, which might be partly caused by how dry the weather is here...either way doesn't matter, the point is I made this soup for her.

Keeping in mind that her tummy was all over the place, I tried to keep the soup as, what's a better word for "bland," as possible. It still turned out bomb, duh, but next time I make this (and my suggestion to you) would be to toss the veggies and pears in a salt and cayenne mixture. That little bit of roasted zing will be amazing.

Also, I didn't blend up the whole thing just about 3/4 of the batch. I like the chunk...and for white wine I used a big ass bottle of cheap chardonnay (1 cup in the soup and the rest in my glass). 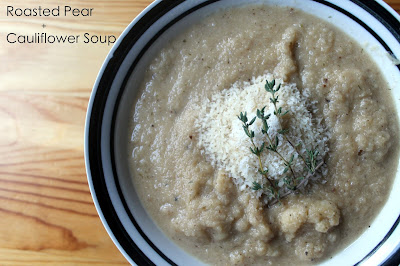