WorldVegan Saturday: L is for Luxembourg

After a little siesta WorldVegan Saturday has made a triumphant return with this Special Sunday Breakfast Edition. When I woke up this morning the letter "L" was top of mind: London (that's not a country, stupid!), Lebanon, Liberia, Luxembourg: That's it! A country landlocked by some place famous for waffles, France, and Germany, which are famous for other reasons I'd rather not talk about. The best part about trying to throw this impromptu German brunch together was utilizing my Vegan McGuyver-ish super powers to piece together this incredible, face-melting, mind-blowing, fist-pumping experience (Toot-toot: that's my own horn I'm blowing).

So check it, VegHeads: kartoffelpuffer, or as us simple folk like to call it, "potato pancake," is a native dish to just about every country; every one is trying to claim it as their own, including me. 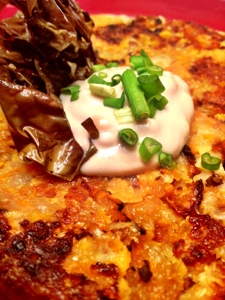 ChefMom made it over for coffee this morning so having her chefary (yes, I sure did just make that word up) skills in the kitchen was a huge contribution to the success of today's brunch. So, we made this kartoffelpuffer (gesundheit!) and topped it with a cashew cream and green onions. We served it with sliced roma tomatoes, pan-fried dulse, and my famous-ish Crock-Pot Apple Sauce. (well it has like 40 repins on pinterest...) 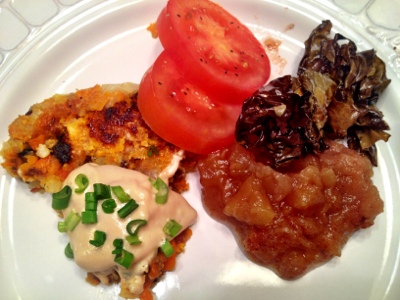