In today's newest installation of this here mediocre blog, you, dear reader, are going to learn about my petty side. I guess I wouldn't really call it a "side," per say, more like a deep core motivator that must be continually stifled in order for me to maintain any semblance of humanity.
See VeganMoFo has prompted us to create a dish to counter an "Anti-Vegan." Oh, you know who I'm talking about: your uncle who won't even try your dish at the family potluck because he's a 'real man and real men eat meat;' or your coworker who finds a reason to interrupt your lunch every day to tell you just how good your food looks, but how she could 'never live without (insert animal product here)'. Yeah, y'all know exactly who they are.
Well here's my petty. I don't care about them, or battling them, or attempting to counter their ideas regarding just about anything because sticks stay stuck and some perfectly prepared seitan ain't fixin to change the way your uncle views veganism. So the pettiness I keep buried deep in my belly but oddly still close to the surface says "make something so annoyingly vegan that an anti-vegan wouldn't even dare try it, let alone spend twenty entire minutes explaining that your portobello mushroom doesn't actually taste like steak. How about a nice raw lasagna served with large raw massaged kale salad? That sounds pretty bomb to me.
Pause on the petty: I realize now my position is not entirely accurate. My mom and step-dad just celebrated their anniversary a few months back and while I can comfortably say that my step-dad isn't entirely anti-vegan *now*, that was not always the case. For their anniversary I decided to make them a nice lunch but on that particular day everyone was really busy, I was broke, I had little to no food, and I had a picky eater (my step-dad) and an amazing chef (my mom) on the way over to boot.

Petty Disclaimer: I did make a salad that I knew my step-dad would hate without even trying but it wasn't for him it was for my mom and she loved it: Fried Peach Pasta Salad. But for my step-dad, I made a BBQ Ranch Chicken Flatbread which he loved as well. Although this may be the only instance where I've gone out of my way to please an "anti-vegan," I realize I probably wouldn't spend hours dehydrating raw lasagna to piss an anti-vegan off, I'm more likely to do something quick, easy, and small so that the anti-vegan can just pop the entire thing in their mouth and chew it quickly so they can say that at least they tried it - but still hated it cause 'that didn't really taste like real cheese.'

Broken record time: As you may have seen from previous posts or MoFos past, I'm not really a sweets person. Every once in a while I get a craving for dessert or a sweet breakfast but not frequently. I do love converting sweet dishes into savory dishes though which is how we have arrived at this dish.  I've transformed the traditional sweet monkey bread into the vegan pizza lovers greatest weapon at a blended pot luck. 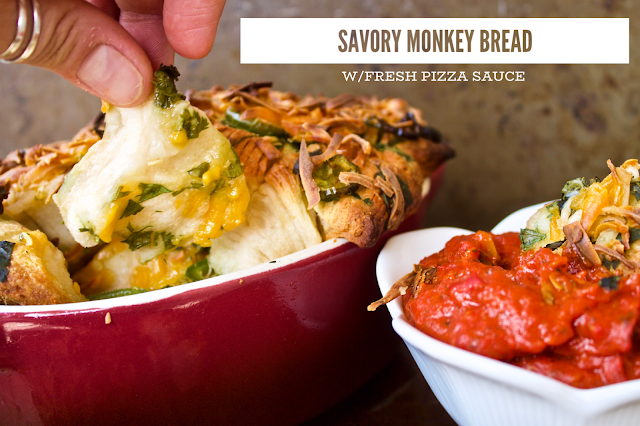 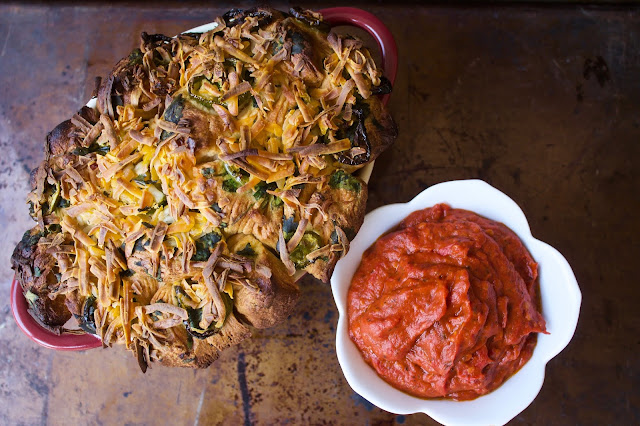 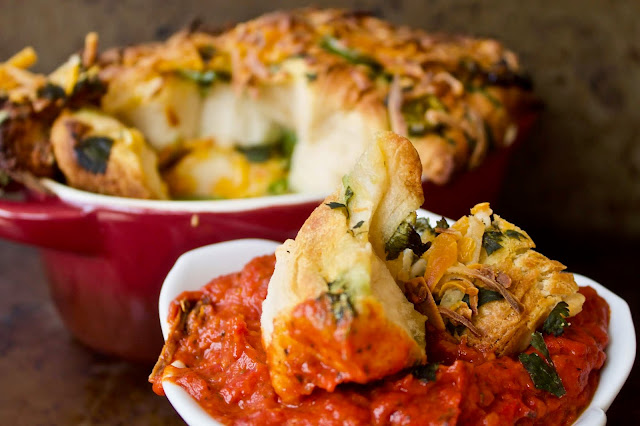 Up next, I've been tasked with creating a dish inspired by a color and I get to chose the color. Green is the only color I care about having on my plate, but will I choose it? Come back tomorrow to find out.
ICYMI, yesterday I was inspired by my fave cookbook. I created a dish with the same color palate as the cover and I included a culinary concept from the book. Find out what I made by clicking HERE.