One of the other requests I got from my facebook fans was to make a healthier version of pecan pie with no sugar. This is nearly impossible as the entire filling is literally just gelled sugar. This is my shot at making a healthier version anyhow. I used my pumpkin pie filling to replace the gelled sugar and this to me is healthier because now you only have to eat 1 piece of pie to get all the pie flavors of Thanksgiving instead of two.

Try it this holiday with the delicious Maple Cinnamon Coconut Whip down there. It's magnificent. Just be careful not to cut your hands on the can when you are scooping out the good stuff, cause blood isn't vegan. 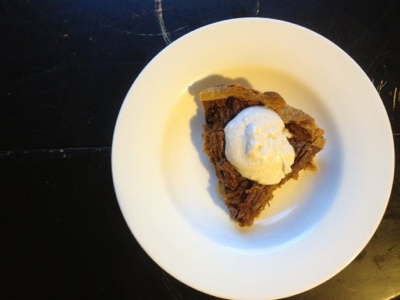