Epiphany hit this morning! I asked myself: "Self, you love coffee, and you love smoothies for breakfast; why not marry the two?" Well, that's a damn fine idea, if I do say so myself (and I did). Now I can't be doing this all the time because the green smoothie does have an edge on this lil guy, but I do think this particular smoothie will serve to be a well deserved treat every once in awhile.

With the arrival of Spring and the inevitable appearance of Summer just chilling around the corner, it's become apparent to me that shedding off a few of my I'll-just-cover-up-with-my-sweater pounds wouldn't really hurt anyone. I'm not fat by any means, but I do easily gain five to ten pounds during the colder months, which is typically a cinch to carve back off. I can't really give you a good explanation of how we actually got here...oh, yes! The treat. I am going to use the breakfast/brunch smoothie as reward for practicing a healthy lifestyle, once a week. You might be questioning this last statement, and let me assure you that being vegan in no way indicates being healthy. For instance, I am a recovering junk food vegan (think oreos, meat substitutes, and other processed CRAP), and on the other end of the spectrum you might find "vegans" who are actually victims to eating disorders like anorexia or bulimia and they use the vegan diet as a cover up for why they don't eat (I have been there too). Point: neither one of these approaches are healthy.

Blah, blah, blah. Tangent, tangent, tangent. Boring stuff - and so try this smoothie out whenever its clever. It's pretty amazing. 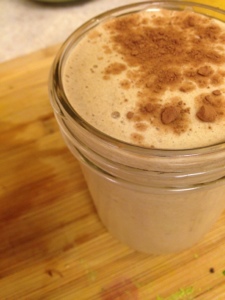