WorldVegan Saturday: F is for France

Le dîner often consists of three courses, hors d'œuvre, plat principal, and a cheese course or dessert, sometimes a salad is offered before the cheese or dessert. Yogurt may replace the cheese course, while a simple dessert would be fresh fruit. The meal is often accompanied by bread, wine and mineral water.

1 can kidney beans, drained and rinsed

1 can white beans, drained and rinsed 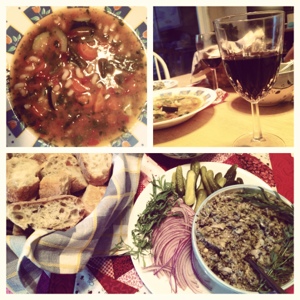