WorldVegan Saturday: A is for Argentina

MomChef, VegKid and myself have decided to celebrate international cuisine every Saturday, vegan style. We have started with a country that starts with "A" (Argentina!) and will work our way through the alphabet to Zimbabwe week-by-week until we've exhausted all letters of the alphabet (maybe not "X", we'll cross that bridge when we get to it.), wrapped our minds around cultures we've never truly experienced and stretched our vegan culinary taste-buds all around the world.

A is for Argentina: 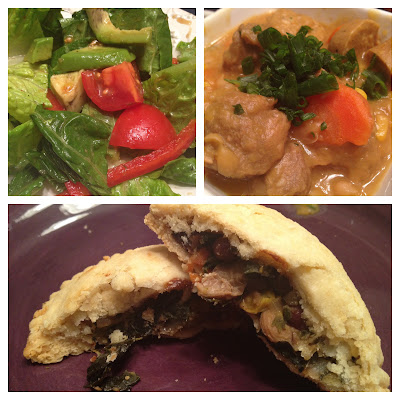 There is nothing Argentine about this salad; I just feel weird not having greens somewhere for every meal. I'm a VegHead like that.

Locro is the Spanish word for stew, or thick soup. This navy bean soup is a version of locro from Argentina. It's similar to corn chowder, and is traditionally made with beans, chorizo, beef, smoked bacon, squash, and served with a spicy salsa.

My interpretation of the dish was hearty but can be a bit overwhelming with the meat substitutes but delicious none-the-less. It was a welcomed treat.

Third Course: Empanadas
Argentine empanadas are often served at parties as a starter or main course, or in festivals. Shops specialize in freshly made empanadas, with many flavors and fillings.

The dough is usually of wheat flour and butter with fillings differing from province to province: in some it is mainly chicken in others beef (cubed or ground depending on the region), perhaps spiced with cumin and paprika, while others include onion, boiled egg, olives, or raisins. Empanadas can be baked (Salta style) or fried (Tucuman style). They may also contain ham, fish, humita (sweetcorn with white sauce) or spinach; a fruit filling is used to create a dessert empanada. Empanadas of the interior regions can be spiced with peppers. Many are eaten at celebrations.

You will have left overs of this filling. I will use my half of the leftover filling to top a baked sweet potato or perhaps make enchiladas later this week. GET CREATIVE!